Interview with a Ballplayer: part 1 of 2 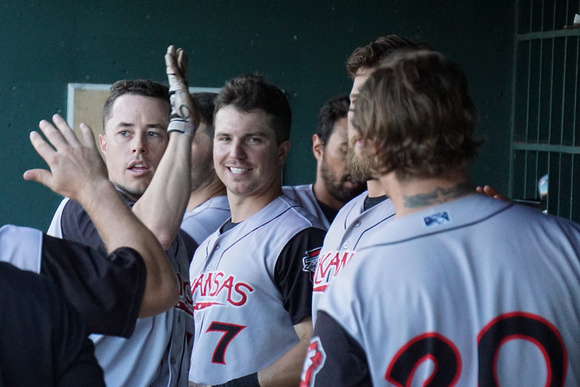 Originally published on my website Ol' Abner on July 24, 2017

I took a photo of this ballplayer in June and I wondered how he got here. So I wrote this:

"Can he hit a curveball? How many times has he taken cuts at batting cages attached to mini-golf courses? Maybe he doesn’t like to carry change, those quarters clinking in his pockets. I wonder if he had to miss the family reunion for a tournament when he was 15.

Does he read The Atlantic? Does he ever think about playing in Japan instead of a Double-A team in Arkansas? I wonder if he ever gets tired of playing long toss and whether he chews on ginger candy so he doesn’t get motion sickness during 12-hour bus rides."

I guessed, but I was curious about the truth. So, I added the photo to Instagram and asked for an interview. A couple of days later we chatted on the phone for about 20 minutes. His team, the Arkansas Travelers, had just finished batting practice prior to a game against the Northwest Arkansas Naturals in Little Rock.

Ryan Casteel, 26, is a first baseman playing in his eighth professional season, his second in the Seattle Mariners’ organization. He's advanced as far as Triple-A with the Colorado Rockies.

“I’ve had good years and I’ve had some unfortunate injuries, but when you work so hard from such a young age, the dream never really dies,” he said.

Buses are easier with busses; his wife travels with him to games within the division. She works as a personal assistant during the off-season, and he trains year-round.

“We don’t have any kids, and we really have no responsibilities, so it’s easy,” Ryan said.

I brought up a recent Missouri State player, Jake Burger, who was drafted 11th overall by the Chicago White Sox this June. I mentioned that we, the fans, expect him to reach the majors right away. Maybe it's the $3.7 million signing bonus, or maybe it was watching him hit a ball over the scoreboard.

I wondered if he gets discouraged. He doesn’t.

“If you get discouraged you’re just doing yourself a disservice. You gotta enjoy it. I know a lot of people would give a lot to be able to do what we do – whether it’s Double-A, Rookie ball. They’d give anything to play professional baseball.”

And he’s been close to the majors.

“I thought I was on the fast track. I was in Double-A when I was 22 years old in Tulsa, had a good year, and the next year I went to Triple-A. I was hitting .380 in June and I’m thinking ‘Man, I’m gonna be in the big leagues soon’ – and then I got hurt and then you realize how the game really works.”

And if you get called up to the majors after all this time, and you only have 20 at-bats to prove yourself?

Casteel says he channels the pressure, and with good reason:

"If you can’t handle the pressure you can’t play in the big leagues,” he said. "You got 30,000 people watching you play every night and you’re trying to win – if you don’t perform you’re not gonna be there too long."

Next up, in part 2 of our conversation: handling failure, how faith affects him, regrets, and the age-old question - do you ever get tired of baseball?